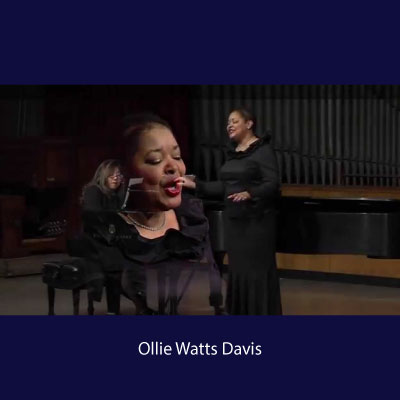 On July 16, 2022, we will encore our original The Black Rose Salon concert which  will be performed for residents and dignitaries. Airing on screens located around the YMCA will be an original video of the statue’s creation and photos of the July 13, 2022, installation ceremony in Washington D.C. Also on the evening of the 13th GENVAS featured Ollie Watts Davis, soprano and Jacques – Pierre Malan, cello in a musical interlude at a private black-tie reception hosted by the Bethune Statuary Fund at the Florida House on Capitol Hill.

A portion of ticket proceeds from the 16th Salon concert will benefit the Dr. Mary McLeod Bethune National Alumni Association many of whom will be our special guest.

Ollie Watt Davis is an American Soprano and is a Professor of Music, University Scholar, University of Illinois where she also serves as the conductor of their Black Chorus. The San Francisco Chronicle described her as “…a bubbling stream of a voice, remarkably smooth down into a resonant, rich low register” where the New York Times stated, “…a lovely, warm, admirably focused tone” and The Chicago Tribune found her performance “…poignant and lovely.” Since her New York debut at Carnegie Hall in 1990, Ms. Davis has appeared in many of the nation’s great concert halls with leading orchestras, including the San Francisco, Minnesota, Houston, Milwaukee, Pittsburgh, and Dallas Symphony orchestras. Internationally, she has appeared with orchestras in Venezuela, Mexico, Spain, China and Taiwan.

Casey Robards is a pianist and vocal coach known for her sensitive musicality, stylistic versatility, and expert collaborative skill. Dr. Robards has concertized throughout the U.S., Europe, Central and South America, and Asia. Dr. Robards is currently Clinical Assistant Professor of Keyboard/Voice at the University of Illinois and Conductor/Head of Collaborative Piano at the Bay View Music Festival.

Nestor Torres, flute & special guest host, unique talents & specific rhythmic style has garnered him four Latin Grammy nominations, one Grammy nomination and one Latin Grammy Award. In addition to 18 solo recordings, Torres’ has collaborated with Gloria Estefan, Kenny Loggins, Dave Matthews, Paquito d’Rivera, Herbie Hancock, Arturo Sandoval, and Tito Puente. In addition to his achievements in the studio and on the stage, Torres is also the recipient of many awards, including two honorary doctorate degrees from Barry University and Carlos Albizu University, for his commitment to youth, education and cultural exchanges.

Darius V. Daughtry, poet, is also an accomplished playwright, director, and educator. He is the Founder and Artistic Director of Art Prevails Project, a performing arts organization dedicated to expanding cultural conversation through theatrical performance, arts education, and community engagement. Darius has spearheaded literacy initiatives with NFL Hall-of-Famer Jason Taylor and poet and actor, Omari Hardwick. He has been commissioned to write, perform, and conduct workshops for various organizations and directed performances for numerous groups and organizations.

There is no pre-salon reception or table service at this event.